The Swiss national government visits Klostergut Paradies on 7 July 1981. The magistrates travel from St. Gallen to the tranquil environment of Lake Constance with the neighboring Rhine landscape. Klostergut Paradies is their last stop before returning to Bern.

“After taking a river boat from Stein am Rhein to Schaffhausen, the seven premiers, including the old and new Federal Chancellors, visited the Iron Library of Georg Fischer Aktiengesellschaft, with light refreshments (…) in the convent garden,” reported the Schaffhauser Nachrichten newspaper on 8 July. “The party cheerfully boarded the helicopter later than planned to fly to Bern via Rheinfall,” “GF intern” reports. 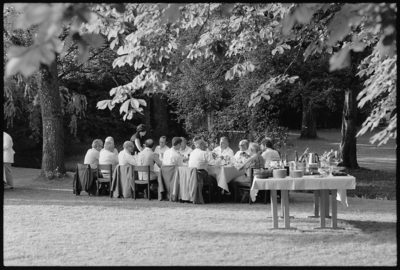 The Swiss Federal Council on a school trip to Klostergut Paradies, 1981 (H. Hasler)

Read what happened in the next few years